Like most kids, Azalea Morgan loves polar bears. “They’re fluffy and cute,” the 8-year-old says, and after watching a documentary on how climate change is affecting these Arctic apex predators, she badly wanted to help. Her mom, Molly Morgan, suggested she do something big, because the problem of global warming is monumental.
For nearly three weeks last September, Azalea pedaled her bike alongside her mom and 9-year-old sister, Ember, setting out from their hometown of Andover, New Hampshire, en route to New York City to attend the United Nations (UN) Climate Action Summit, where Greta Thunberg and other global youth leaders marched for change. The trip was a fundraiser to put solar panels on their school and for future projects under KidsCare4PolarBears, a Facebook page that documents their ongoing efforts.
While not everyone has the time or inclination to ride 250 miles and camp—some of it in the rain—or as Thunberg did, sail across the Atlantic in a zero-emissions yacht, there are steps individuals can take to combat climate change on a grassroots level, experts say, because the crisis is undeniable, as seen most recently in the catastrophic bushfires across Australia.
There are peaceful protests taking place worldwide scheduled throughout 2020 with Fridays For Future and other organizations, but a growing number of individuals that want to do more are using their imaginations and creative endeavors, inspiring others to take unique action.
Students at a school in Spain wrote and performed a play and illustrated a book to raise climate change awareness, while a teen from California used her artistic skills to raise thousands of dollars for wildlife. On March 28, people around the world participated in the World Wildlife Fund’s Earth Hour by collectively turning off lights at 8:30 p.m. while holding eco-events, and others are joining in the global tree-planting campaign of The Nature Conservancy (TNC).
Reversing course may seem insurmountable, but individuals have a lot of power, says Dan Shepard, UN global communications officer: “The choices we make, the things we do, collectively matter and can have a huge impact on the world.”

Stepping Up for Biodiversity

“I wanted to inspire other kids,” Ember says of her bicycle trek for polar bears. “I love animals and they deserve to not die.”
According to a 2019 UN Global Assessment Report on Biodiversity and Ecosystem Services, more than 1 million species are threatened with extinction, and one of the main reasons is climate change, say experts, including Nikhil Advani, director of Climate Communities and Wildlife at the World Wildlife Fund (WWF). Protecting large predators is one key to enriching biodiversity, Advani says. “The top of the food chain has a significant impact on prey species and the ecosystem.”
But predators are suffering because of humans that are feeling the impacts of climate change, Advani says. Long droughts have forced many Kenyan pastoralists to enter protected parks and compete with wildlife for water and grazing land, resulting in lion deaths as retaliation for killing livestock. In the Himalayas, as the Earth warms, snow leopard habitat is being encroached for pastureland. In Zimbabwe, farmers have turned to chopping down trees for wood as an alternative economic opportunity. “Everybody is stressed and competing for resources,” Advani says. “It is a very severe result of climate change.”
Advani and researchers are working in tandem with local societies in 30 countries across Africa, Central America and Asia to fund novel projects under the Wildlife Adaptation Innovation Fund. For instance, they are piloting a rainwater harvesting project to help farmers get through the dry seasons and are constructing concrete and mudbrick nests to help albatross breed better in Tasmania. These special projects are based on available levels of donations that are sometimes crowd-sourced.
Raising funds for innovative projects, as well as increasing awareness of what’s happening, is an important grassroots strategy, says Elan Strait, WWF director of U.S. climate campaigns. It can be as simple as sharing updates, tagging social media influencers and instigating a rallying cry. WWF has its own program called Panda Ambassadors in which conservation activists of all ages can get tips and tools to promote specific projects they feel most passionate about.
“I love to see what young people are doing, because if we collectively use our voice to amplify the facts about climate change, we can work to find solutions,” Strait says. “And we need facts to get out there because, at least in the U.S., some people think climate change is still a controversy and are afraid to talk about it, but we should have that conversation with friends and family so we can find solutions.”

Youth Rising to the Challenge

Getting involved in grassroots-level strategies is empowering not only for kids, but for adults that need their resiliency and inspiration, says Janet Stringer, manager of donor relations at Polar Bears International, in Bozeman, Montana. “In my work, I hear from so many people who are feeling deep despair about the climate crisis. I draw hope from the children who write to us, sharing stories and pictures about their dreams for a future that includes polar bears,” says Stringer. “I think we owe it to the next generation to work as hard as we can to come together and make the necessary changes to ensure that polar bears—and all wildlife—are not a species we learn about in the pages of a book, but a wild species that we can see with our own eyes, reminding us of how special our planet is and why it deserves our respect.”
One of her favorite examples comes from students at the Daina-Isard school, in Olesa de Montserrat, Spain, and their climate-driven projects with teacher Connie Darilek, who asked the Aquarium of Barcelona to help them grow plankton, an organism threatened by warming seas.
“They gave us plankton and jellyfish, and it was really amazing for the students to learn the [Arctic] food chain and how serious it would be losing the polar bear on top,” Darilek says. Students recently published the book Nanuc, a story about a polar bear that they also illustrated, now in its second printing.
Josie Martin, 13, of Solana Beach, California, has raised $8,700 for conservation of rhinos, elephants, pangolins, gorillas and polar bears by giving watercolor paintings to those that donate to charities through her PayPal Giving page. “Each year, I think I’m getting a little bit better at creating art which sends a strong message,” she says. “The message I try to express is that some of our best-known wild animals might in my lifetime no longer be on the planet. I think the difference I make through art is that I am helping to raise awareness for important animal conservation work.”

There’s no one solution to climate change, says Catherine Macdonald, TNC director of natural climate solutions for North America. “We really have to try, all of us. It’s important that everyone feel they can contribute, because everything does make a difference, and no action is too small.”
For those that are not art-inclined, one of the best things people can do is to plant trees, Macdonald says, whether it’s replanting forests or increasing their numbers in urban areas. According to a 2018 study by TNC published in Science Advances, nature-driven land management could sequester 21 percent of America’s annual greenhouse gas pollution—the equivalent of emissions from all cars and trucks on the roads today. Planting trees emerged in the study as the most significant among 21 strategies to mitigate global warming. One good way to get started is join the TNC Plant a Billion Trees program, Macdonald says.
“Climate change is definitely a growing concern that we are facing, and as more people understand there is a problem and what the solutions are, the more influence we can have on the big decision-makers, whether that’s government or corporations that make our products,” she says. “And being aware informs voters to advance climate action.”
While Josie, Ember, Azalea and the students at Daina-Isard aren’t old enough to vote, their message is strong. “I’m worried about the impact climate change will have on our future,” Josie says. “I think people should protest peacefully for the things they believe in and that more people should exercise their right to vote for leaders who care about the youth in our world and the generations to come. I also think people should try to spend a little bit of their time taking action for what they want to see changed in our world.”
Julie Marshall is a Colorado-based writer and author of Making Burros Fly: Cleveland Amory, Animal Rescue Pioneer. Connect with her at [email protected] 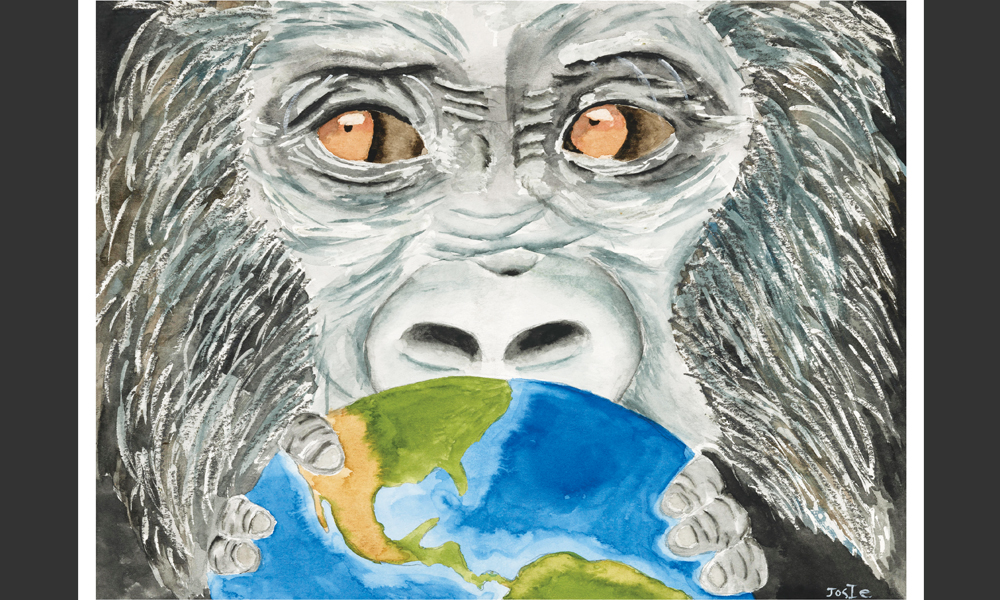 With the help of her mother, Jill, Josie Martin dedicated her 9th birthday to the conservation of rhinos with a fundraiser. This marks the fifth time Josie has chosen to actively support an animal she loves to paint for her birthday month. She raises money for the animal and creates awareness about climate change and the resulting possibility of their extinctions. Donors received signed and numbered copies of watercolor paintings in her Extinction Is Forever series.
The young artist’s fundraisers provide well-researched information on animals and the issues they face. With an upbeat message and a photo of her joyful smile, Josie requests that donors provide their email address so that she and her mom can keep them updated. She works to improve her skills as an artist and sets a modestly higher goal for the number of donors and amount of funds to raise each year. She believes her events are a small thing that she can do for a big world and wants to help ensure that animals do not go extinct in her lifetime.

Fridays For Future – This is a global movement sparked by Greta Thunberg, with a map for climate strikes around the world.
The United Nations – Consider supporting several campaigns for climate change with grassroots strategies, including Climate Neutral Now, ACT Now and Good Life Goals.
Moms Clean Air Force – Parents protecting children from climate-driven pollution, offering strategies to get kids involved.
Earth Hour 2020 – Read about the global effort to dramatize environmental concerns that occurred on March 28 when lights were turned off for an hour around the world.
Panda Ambassadors – World Wildlife Fund engages activists of all ages with a toolkit and inspirational stories.
Plant a Billion Trees – Join in the massive reforestation project by supporting the Nature Conservancy and planting trees.
Polar Bears International – Get involved and inspired through creative projects for polar bears.
In-Print, Green Living National Content Climate Change Feature April 2020

8:00am · Hall Law Criminal Defense
View All Add Your Event